Dave and Dennis, the six-year-old son of Indiana sire Sand Shooter, scored a win in one of the divisions of the Bill Dailey Memorial Saturday, Feb. 8 at Miami Valley Raceway. The $12,500 event was contested at five-eighths of a dash. Dailey, who passed away a few years ago unexpectedly, stabled for several years in the summers in Indiana and had several Indiana Sires Stakes champs along the way. 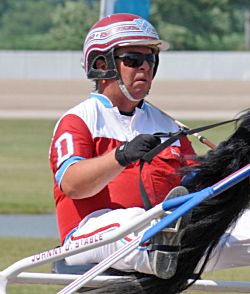 Miami Valley Raceway honored late horseman Bill Dailey Sat. Feb. 8 with two divisions of the Dailey Memorial contested at five-eighths of a mile. One division was won by Indiana sired Dave and Dennis. Photo by Ed Keys, US Trotting Association

Starting from the inside post one, driver Sam Widger had Dave and Dennis in full gear early on but found immediate competition halfway through the race. Dave and Dennis pressed on and fended off the challengers, getting pressure one more time at the wire, but won the event by a head in 1:09.2. Just N Ace and Ricky Macomber Jr. finished second while Venom and Trace Tetrick finished third to make it an Indiana driver trifecta.

Owned and bred by Dennis Hritz, Dave and Dennis has spent his entire career under the direction of trainer Tim Lane. He now has 15 career wins and in excess of $240,000 in purses. He competed in Indiana Sires Stakes action at two and three at Harrah’s Hoosier Park and took his career best time of 1:51.1 at three.

Dave and Dennis’ dam, Andi Andi, who is by Albert Albert, also competed in Indiana during her career and won 23 races and more than $129,000 for Hritz, who also bred and raced her during her career. She is also the dam of Dani Girl, who took a record of 1:56.1 and she has a Sand Shooter filly that will be two in 2020.