Dancin Lance and Luke Plano scored a gate to wire win in the featured $7,000 Open Handicap at Cal Expo Friday, March 18. The duo completed the task in 1:51.1 for their third straight win. 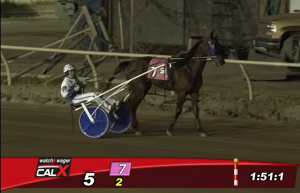 Starting from the assigned outside post seven in the event due to winning the Open the past two weeks, Dancin Lance scooted out of the gate with authority. He had to work hard to get to the lead and for a few steps was three-wide until he cleared to the lead. Dancin Lance led the way through every fraction of :27.1, :55.0 and 1:23.0 before rallying home in :28.1 for the win. A Major Omen sat on Dancin Lance’s back most of the way with a lot of pace and ducked inside around the final turn and committed a pylon violation. Therefore, Albergo Hanover and James Lackey were placed up to second while Its Pointless was moved into third with driver James Kennedy aboard.

Dancin Lance paid $6.40 as the favorite of the field. The six-year-old son of Always a Virgin is owned by Juan Pacheco and trained by Leon Smith. The gelding was bred by Mack Racing Stables LLC of Illinois. The mile was the second fastest of the meet thus far and also a new lifetime mark for the Indiana sired gelding.

Dancin Lance is on a roll this season. He has won five of 11 starts so far. Overall, he has 12 wins in 95 starts and raced at Harrah’s Hoosier Park up until last September when he changed hands and relocated to Cal Expo. His mother, Happy Tears, has a mark of 1:54.0 and earned more than $50,000 during her racing career. Dancin Lance is a half brother to Indiana sired Downthehighwy, who has a mark of 1:51.1 and earnings in excess of $400,000.

Dancin Lance was one of 41 foals by Always a Virgin sold at public auction as a yearling. He sold under the name of Fulton Street at the 2017 Hoosier Classic Yearling Sale for $8,500.