Custom Cantab has been nothing less than spectacular all season at Hoosier Park. Now, the three-year-old daughter of Mr Cantab just showed how spectacular she is, scoring a win in the $183,900 Matron Stakes at Dover Downs Thursday, Nov. 15, her first career start outside of Indiana. 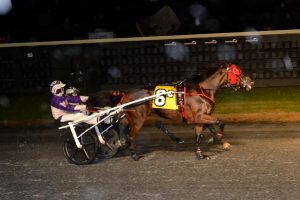 Custom Cantab and David Miller hold off a late charge from the inside to earn the win in the Matron Stakes at Dover Downs Thursday, Nov. 15. (Photo by Judy Wilson)

Custom Cantab was on the move early in the race, trotting straight to the lead and getting that spot after the quarter pole with David Miller in the bike. The filly continued to lead the way for the rest of the mile, trotting home in :28.4 to hold off a late challenge on the inside by Supergirl Riley and Tony Morgan for the win by a head in 1:53.1, just a tick off of her personal best. Plunge Blue Chip and Ake Svandstedt, the favorites of the field, finished third.

Custom Cantab was a bit of a surprise in her Delaware debut, paying $17.80, $6.20 and $3.20 across the board. Trained by Chris Beaver, the $6,000 yearling purchase now has 13 wins in 17 starts this year and boosted her career tally to more than $735,000 to become the second most successful product of Mr Cantab behind world record champ Homicide Hunter. Beaver, Donald Robinson and R.B.H. Ventures Inc. own Custom Cantab.