Custom Cantab, the million-dollar Indiana sired trotting mare, has retired. She was recently featured in a story in “Hoof Beats” penned by Rose Flood, race marketing and operations administrator at Harrah’s Hoosier Park. The story chronicled her stellar career featuring Beaver and caretaker Sheila Napier, who was named 2018 Caretake of the Year following her success with Custom Cantab. 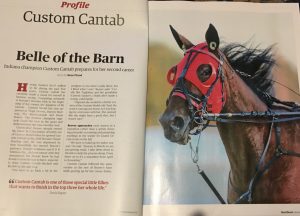 A daughter of Mr. Cantab, Custom Cantab won numerous Indiana Sires Stakes events under the direction of trainer and partial owner Chris Beaver and made her mark in North America against some of the sport’s top trotters. A $6,000 purchase from the Hoosier Classic Yearling Sale by Beaver proved to be a wise investment. She really kicked into gear as a three-year-old, winning 13 of 17 starts and more than half of her career bankroll that season. However, her best time was recorded at four when she won at Tioga Downs in 1:52.0. Her career is complete with 19 wins in 52 career starts and earnings over the $1 million mark.

After experiencing an injury, Beaver and co-owners Donald Robinson and R.B.H. Ventures made the decision to retire her. She was bred by Hoosier Standardbred Farm and Fair Meadow Farm.