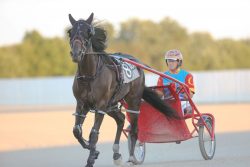 Cullipher, who splits his time between Indiana and New Jersey with owner Tom Pollack, maintained a 36 percent in the money win percentage. His stable just missed earning $1 million in purse earnings for the meet. Ron Burke was second in the training category with 48 wins.

Cullipher and Pollack also teamed up for another leading owner title. Horses from their stable at The Big M were led by Lovedbythemasses, a trotter who won six races. Dealer’s Table and Kenziesky Hanover each added five wins to the tally.

Cullipher is currently leading the standings once again in the trainer ranks in 2021. He has 72 wins to lead the way ahead of Walter Haynes Jr. who has amassed 60 wins. Cullipher has 910 career wins and more than $12.8 million accumulated in career purse earnings. He is heading for a personal best in 2021 with 152 wins, second only to his tally of 186 in 2019. He is on track to break that record over the next four months of racing.