Trainer Jeff Cullipher sent out a pair of Open pacers in the evening’s featured race Friday, April 30 and nearly got a dead heat performance by the two. Saying Grace N, driven by Trace Tetrick, was able to get a slim advantage at the wire over Brassy Hanover and Sam Widger for the win. 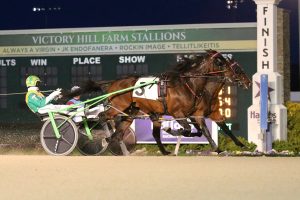 Saying Grace N and Trace Tetrick were the longest shot on the board Friday, April 30 as they scored the win in the evening’s featured Open Pace. Photo by Dean Gillette

Saying Grace N was the longest shot on the board, paying $58.20 for the win. The eight-year-old American Ideal gelding is owned by Cullipher and Pollack Racing LLC, who exported the gelding to the United States in 2019 and earned their 12th win with the veteran pacer. He has now won in excess of $160,000 while racing in the United States and his career mark of 1:48.4 was taken at six at Harrah’s Hoosier Park.

Prior to arriving in the U.S., Saying Grace N won 13 races in New Zealand. He didn’t start racing until he was four.