Jeff Cullipher will complete the 2019 racing season tomorrow with his third straight training title. The Kentucky native, who now resides in Pendleton, has had a banner year and will earn the title nearly 50 wins ahead of the second-place contender. 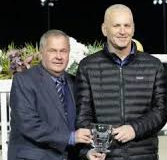 Rick Moore, vice president and general manager of racing at Harrah’s Hoosier Park, will once again present Cullipher with the Leading Trainer title for 2019 when racing concludes Saturday, Nov. 9. Photo by Dean Gillette

Horses from Cullipher’s barn this year have accumulated more than $1.7 million at Indiana Grand, which reflects a great year in his stable. He’s had several top performers through his partnership with owner Tom Pollack with the most noted performer being TJ’s Top Pick, the Indiana sired freshman son of Swan for All who won eight of 10 starts and more than $300,000 in earnings.

Overall, Cullipher has won 167 races this year with purse earnings in excess of $3 million, by far his best year to date as a trainer. Earlier this year, Cullipher and Pollack teamed up to earn Leading Owner honors during the Meadowlands meet. They also teamed up to have two starters in Breeders Crown finals with Grimmie Hanover and Southwind Chrome.