Cruisin Pearl spent most of her two-year-old campaign on the Indiana Sired Fair Circuit last year. She made her debut in an Indiana Sired Mini Series at Harrah’s Hoosier Park Thursday, May 6 and brought home a new lifetime mark in the process. 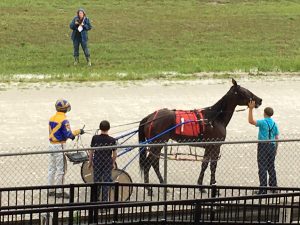 Cruisin Pearl stops in the winner’s circle at Shelbyville last year after one of her many wins on the Indiana Sired Fair Circuit. Photo by Tammy Knox

Driven by Brandon Bates, Cruisin Pearl left from post three and secured the spot right behind the leader Kobe’s Gigi and Peter Wrenn, following along through fractions of :27.4, :56.2 and 1:26.0. In the stretch, Cruisin Pearl hit another gear and rolled by Kobe’s Gigi with a final panel in :27.1 to earn the win in 1:53.3, a new lifetime best. Kobe’s Gigi finished a length back in second followed by Thetruthandtheway and Louis Roy for third.

Cruisin Pearl paid $5.80 for the win. The three-year-old Always a Virgin filly was making her first start of 2021 for owner Jery Schwartz and trainer Henry Graber Jr. The Indiana sired filly won three in a row last summer on the ISFC and now has 5 career wins in 12 starts with purses over the $12,000 mark. Michael Schmucker of Odon, Ind. bred the filly.

Also a big winner on the Thursday card was JK’s Shining Star from the Peter Redder Stable. The JK Endofanera three-year-old was close to the front the entire way for driver LeWayne Miller before rallying home in :28.3 for the win in 1:55.3. Kak’s Rev It Up and Sam Widger finished second over Mae Be Magic and Louis Roy for third.

Owned by Therl Hensley and Redder, JK’s Shining Star paid $26.40 as a surprise in the race. The sophomore daughter of JK Endofanera was bred by Victory Hill Farms and is now four for five in 2021.