Cruisin Pearl and Sam Widger kicked into gear late to score a win in the fifth leg of Indiana Sires Stakes (ISS) action for three-year-old filly pacers Friday, Aug. 20 at Harrah’s Hoosier Park. The sophomore was one of two winners in the series, joined by Somethingbeautiful as a winner in ISS action on the card. 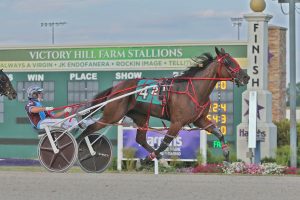 Cruisin Pearl, identifiable with her orange harness, was an ISFC winner last year and is now an ISS winner in 2021. Driven by Sam Widger, the sophomore filly scored a new career best in the effort. Photo by Dean Gillette

Cruisin Pearl started her division from post four and floated over to the inside at the back of the pack as Always a Miracle and Ricky Macomber Jr. set the first fraction of :26.0. GD Western Joyce and Robert Taylor were left on the outside  and pursued the lead at the half in :54.3. Rollonbeauty and Brandon Bates then got into the mix to move to the lead at the three-quarters in 1:22.4 with challengers following on the outside ready for the stretch drive.

Second over on the outside was Cruisin Pearl, who found the cover she needed to carry her into perfect striking position in the stretch. She rallied home in :27.4 to score the win in 1:51.0 by one and three-quarter lengths over Shelly Rockwell and James Yoder. Uncut Gem and Joey Putnam closed well late in the race to finish third.

Cruisin Pearl paid $6.20 for the win. She is trained by Henry Graber Jr. for owners Eleven Star Stables. Michael Schmucker bred the three-year-old Always A Virgin filly, who scored her fifth win in 11 starts for 2021. The win in ISS action was a new career best for the filly, who started off on the Indiana Sired Fair Circuit last year at two. This was the first ISS win for Cruisin Pearl.

Joining Cruisin Pearl as an ISS winner on the card was Somethingbeautiful and LeWayne Miller in the second division of three-year-old pacing filly action. The duo got away in mid pack as Always a Spinster and Trace Tetrick rolled out to the early lead, setting the first fraction in :26.0. They continued to lead the way through the half at :55.1 before Somethingbeautiful worked her way up on the outside to challenge at the three-quarters in 1:23.3.

In the stretch, Somethingbeautiful took over, pacing home in :26.4 for the win in 1:50.4, one and one-half lengths ahead of Like It Like That and Darrell Wright who closed in for second. GD Rockin Kay and Michael Oosting finished third.

Somethingbeautiful, last year’s freshman pacing champion in Indiana, is trained by Dylan Davis. She is owned by Howard Taylor, Edwin Gold, Abraham Basen and Richard Lombardo. Aaron Stutzman bred the Always a Virgin filly, who earned her third win of the season in eight starts. Her time in ISS action also marked a new career best. She is now 11 for 19 in her career with more than $418,000 in earnings.