A total of 11 winners produced double digit payouts during opening weekend at Harrah’s Hoosier Park Friday, March 26 and Saturday, March 27. One of those winners was Crooked Smile, driven by LeWayne Miller on the Saturday card in a division of the Mega Bowl Prep claiming series.

Starting from post seven, Crooked Smile eased his way over to the inside path at the back as Rising to the Top and Peter Wrenn reached the first quarter in :26.3. The duo continued to lead the way through middle fractions of :53.4 and 1:22.0, setting up the field for a charge to the wire in the stretch. 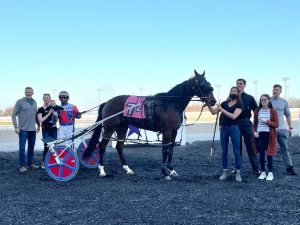 The connections of Crooked Smile celebrate his win Saturday, March 27 at Harrah’s Hoosier Park. He was a $30.00 winner with LeWayne Miller driving.

Crooked Smile was widest of all as a calvary charge ensued in the final stages. Approaching the finish, it was Crooked Smile with the strongest stride winning the race by two and one-quarter lengths over Rose Run Uriah and Brandon Bates, who were victorious in a photo finish for second over Father Ted GB and Ricky Macomber.

Trained by Tim Wilson Jr., Crooked Smile paid $30,00 for the win, which was recorded in 1:51.2. Paired with Rose Run Uriah, also a longshot, they produced an exacta payout of $5,967 and sent the superfecta into the third race of the night with no winners and a carryover, new on the wagering menu at Harrah’s Hoosier Park this season.

Crooked Smile is owned by Wilson Racing Stable, David Mickel and Patricia Mickel. The four-year-old Panther Hanover gelding was bred by Ellis Bryant. The latest win was a new career best mark for Crooked Smile, who now has five wins in 28 career starts with earnings approaching $50,000. It was is first win of 2021 in only his second start of the year.

Drivers Sam Widger recorded four more wins added to three from Friday evening to take the early lead in the driver standings with seven wins over Trace Tetrick, who also scored four on the Saturday card to bring his early tally to five. John DeLong won four races on the opening night card to sit in third.

Jeff Cullipher took the early top spot in the training standings with four wins over the two-night weekend followed by Peter Redder in second with three wins.