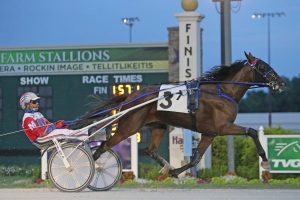 Country Girl Charm and LeWayne Miller remain undefeated with their latest win in the first round of Indiana Sires Stakes action at Harrah’s Hoosier Park. Photo by Dean Gillette

A product of the LeWayne Miller Stable, Country Girl Charm got away in mid pack as Audacious Ava and Brandon Bates led the way through the first half in :59.3. Country Girl Charm and Miller were then out and rolling first over, reaching the three-quarter mile marker in 1:29.2 before posting a two and one-quarter length victory in 1:57.1. Treasure Gems K and Trace Tetrick finished second over Queen of All and Doug Rideout for third.

Country Girl Charm is owned by Ryan Raber, Darvin Wagler, Miller and Susan Garrels, all of Indiana. The Whom Shall I Fear filly was bred by Daniel Frey Jr. She is now undefeated in three starts this year. Her career best time was taken in mid-July in 1:57.0.

The second division was won by the Erv-Miller trained Swift Swanda. A similar second half trip brought her to the forefront in the stretch for Trace Tetrick and she was a winner by two and one-quarter lengths in 1:57.2. Bad Shot and Marlin Fry finished second over Fantasia Flurry and Peter Wrenn for third.

Swift Swanda is owned by Anthony Lombardi and The Kales Company LLC. Lavon Miller is the breeder of the Swan for All freshman. She was purchased for $80,000 through the sales ring last fall.

The final division was awarded to Four Under Par and Doug Rideout. A daughter of Swan for All, Four Under Par was a near gate to wire winner in 1:58.0. Real Diamonds K and Tetrick finished second while Mocha Swirl and Miller finished third.

Four Under Par is owned by Julie Rideout, Dr. Alan White and Dave Gamble. Michael Wilt is the breeder on Four Under Par, who was a $23,000 purchase at the Hoosier Classic Yearling Sale last fall.