The Miami County Fairgrounds in Converse will host 22 races for the Indiana Sired Fair Circuit Friday, Aug. 23. First post is set at 11 a.m. 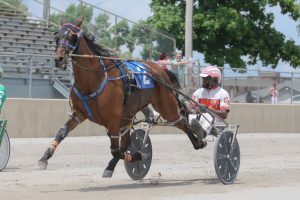 Rock it Out and Clifton Bell return to the ISFC at Converse Friday, Aug. 23. Photo by Dean Gillette

The two-year-old filly pacers will see the return of Rock It Out trained by Donna Holt. The Rockin Image filly found success early on the fair circuit before going to Hawthorne, scoring a win and a new lifetime mark of 1:57.2. Her last start was a fifth place finish at Harrah’s Hoosier Park. Rock It Out starts from post three in the fifth race of the day with Clifton Bell in the bike.

Rigginswind will seek her fifth win in her 11th start in a division of two-year-old filly pacers. The Riggins filly, trained by Curtis Sumpter, scored her best time in a win at Frankfort in 2:01.3. Rigginswind comes into Converse off a win at Goshen last week. Matt Rheinheimer will drive from post four in the sixth race.