The Converse Fairgrounds will host the first round for the Indiana Sired Fair Circuit (ISFC) races Saturday, July 4. A total of 18 races have been carded with a first post of 11 a.m. 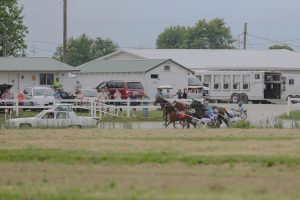 Two-year-old filly pacers will be the first featured on the track with six divisions. Of the 34 entered, all will be making their first career purse starts. The first race includes Meadowbrook Lady, a daughter of quick Indiana sired mare Lady Lakers, who took a mark of 1:53 during her career. Meadowbrook Lady, who hails from the Donna Loney barn, got a qualifier in at Harrah’s Hoosier Park to prepare for the first round of the ISFC. Logan Loney will drive the James Reed-owned JK Endofanera filly from post two.

Seven divisions of two-year-old colt and gelding pacers will be held. The sixth race includes a full brother to Rigginswind as TC Riggins makes his first start for the Curtis Sumpter barn. TC Riggins, a son of Riggins, also got a qualifier in at Harrah’s Hoosier Park in preparation for the ISFC. He will start from post two with Matt Rheinheimer at the controls.

Three-year-olds will polish off the card with several familiar names on the overnight. The final race features three-year-old colt and gelding trotters and the return of J-S Ivan the Great from the Jack Myers Stable. The Swan for All gelding, who won seven races last year, will start from post eight on the second tier with Alex Udell in the bike.

A total of 20 dates will make up  the ISFC at eight different locations in 2020. The next stop for the ISFC is the Jay County Fairgrounds in Portland set for Wednesday, July 8.