The weather may have dampened the atmosphere Wednesday, July 22 but the competition was fierce during the first of two days of Indiana Sired Fair Circuit (ISFC) at the Shelby County Fairgrounds. Two-year-olds kicked off the action with five horses across the track in the first division of two-year-old filly pacers. 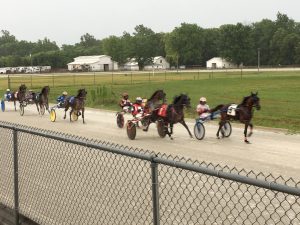 Tellitlikeafra and Clifton Bell lead the way to the half through the rain in the first division of two-year-old filly pacers. Candy It Is and Kenneth Shields move out to challenge. Photo by Tammy Knox

Tellitlikeafra and Clifton Bell left the gate with speed to secure the top spot in the first division with Candy It Is and Kenneth Shields getting the two-hole over the sloppy track. As the field approached the half, Shields had Candy It Is out to challenge and remained parked for the rest of the mile, never backing down.

In the stretch, horses began to fan out across the track with Don Eash and Electrocuted dipping to the inside to try to get past the leaders. Mel’s Vicki Lou and Joey Putnam were widest of all and got up for the win in the last step in a time of 2:05.3, a final quarter in :29.4 through the rain. Candy It Is was a game second, just a neck back of Mel’s Vicki Lou. Tellitlikeafra was third. Only one and a half lengths separated the top five finishers.

Mel’s Vicki Lou is owned by JP Racing LLC and Michael Lee. Joe Putnam trains the daughter of Riggins, who earned her first career win in her fourth career start. Elmer Yoder of Shipshewana, Ind. is the breeder.

Two-year-old pacing colts and geldings were then on the track for four divisions. A close finish was recorded in the first heat at Ultimaroca and Charlie Conrad edged out This Kit Rocks and Joey Putnam in 2:02.3. The Rockin Image filly, also trained by Conrad, is owned by Sarah Conrad and Michael Allen. Alvin Fry bred the colt, who is now three for four this season.

Other two-year-old pacing colt and gelding winners on the day included Big Gulp and trainer-driver Jay Cross in a time of 2:02.0, Northern Network and Jordan Ross in 2:05.0 for trainer Robert Taylor, and Lil Joe III and trainer-driver Anthony Gray in 2:05.0.

Thursday’s card at the Shelby County Fairgrounds will feature freshman trotters and sophomore pacers. First post is 11 a.m. for the 14-race program.