Howard Beissinger was a hero of harness racing several decades ago. Now, the Ohio native is honored each year with the Howard Beissinger Memorial Medley at Miami Valley Raceway. The series offers different distances and started off with a five-eighths mile dash in the first round and it was Indiana sired Compelling that won the first of two divisions on the Friday, Feb. 5 card. 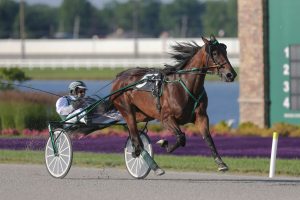 Starting from post five, Compelling did not use early speed for trainer-driver LeWayne Miller and opted to follow along as The Next Triumph and Trace Tetrick set the tempo of the shortened trotting event. Midway through the race, Compelling began to get into gear and by the time the stretch arrived, she was in full stride, blasting home for the win by a head over The Next Triumph in a time of 1:10.4. Pink Tulip and Jason Brewer finished third.

Compelling was the favorite of the field, paying $2.80. She is owned by Verlin Yoder, who is currently winter training at Gil Crest Training Center in Bell, Fla. Lavon Miller bred the now seven-year-old daughter of Swan for All, who now has 18 career wins and more than $266,000 in career earnings. She has yet to finish off the board in four starts this season under the direction of LeWayne, and carries a career best time of 1:52.0 taken as a five-year-old at Harrah’s Hoosier Park.

Several other Indiana connected horses were winners on the 14-race card at Miami Valley Friday. Sherri’s Babe, a four-year-old daughter of Always a Virgin, was a near gate to wire winner in conditioned pace action. Driven by Tetrick, the Steve Bauder-trained mare was a two and three-quarter length winner in 1:53.2 over another Indiana sired horse, Makeitagaingo and Jordan Ross. Moscato, also Indiana sired, made it a trifecta for the Hoosier State by finishing third for Cameron McCown.

M E Radar Girl and Tetrick also connected in a conditioned pace for the win by nearly four lengths in 1:54.0. The Radar Sign mare, trained by Tyler George and bred by Lester Schmucker, was a $5.00 winner over Allbeastnobeauty and Tyler Smith. Bellini Seelster and Kayne Kauffman finished third.

Other Indiana sired winners included I’vegotagirlcrush, a son of Real Desire, driven to victory by John DeLong for Trent Stohler in a time of 1:54.4 and Youlookhot, driven by Randy Tharps, a daughter of Kilowatt who was a $44.00 winner for trainer Trent Tharps Jr. in a time of 1:58.0. Indiana-owned Barley’s Angel kicked off the night with a win for Joe Putnam and Debbie Brown. Joey Putnam guided the Charley Barley mare to the 1:59.4 win, paying $10.20 to her backers.