It was a small but powerful field for the Saturday, May 25 $20,000 Open Trot at Harrah’s Hoosier Park and could have been won by any of the six entrants. However, the betting public was correct in choosing Compelling as the favorite as the mare romped to victory in a time of 1:52.0 for trainer-driver Verlin Yoder. 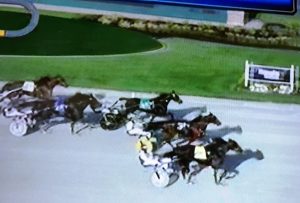 Compelling used a late move on the outside to win the $20,000 Open Trot at Harrah’s Hoosier Park Sat. May 25. (Photo by Tammy Knox)

Starting from the outside post six, Compelling came into the race with two wins in three starts for 2019 and the best mark of 1:52.4. As the gate folded, Trace Tetrick had Churita ready to race and rolled to the lead to keep the field behind him in single file through the first quarter in :27.3. Churita looked strong on the front and there was no visible movement until the field entered the final turn. Bridge to Jesse’s and John DeLong popped to the outside first with Compelling right at his back.

At the head of the stretch, Churita wasn’t backing down as Two O B Wonkenobi tipped to her outside. Widest of all was Compelling but it appeared at first she was not going to gain on the leaders. That scenario changed halfway down the stretch as Compelling found another gear and moved right on by for the win over Bridge to Jesse’s, who was second over Churita for third.

Owned by Yoder, Compelling now has 13 career wins in 49 career starts and pushed her earnings to more than $194,000 with the win. The race also marked a new career best for the five-year-old Indiana sired daughter of Swan for All. Compelling was bred by Lavon Miller of Topeka, Ind.