Comaneci picked up her third win in four starts at Harrah’s Hoosier Park this year, winning a division of the Kenneth Stohler Series. The four-year-old Rockin Image mare is nearing her all-time best mile, scoring the win in 1:52.2. 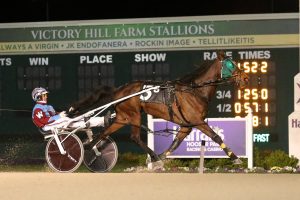 Starting from post five, Comaneci and Sam Widger had intentions of going straight to the lead but were beat to the punch by Imshortandsweet N and Brandon Bates, who secured the first quarter in :28.1. Comaneci was persistent, taking over by the half in :57.1 before speeding up the pace to the three-quarters in 1:25.0.

In the stretch, Comaneci had control over the field, drawing off to a three and three-quarter length advantage at the wire. Imshortandsweet N finished a comfortable second over Lady in Fashion and Jesse Yoder for third.

Comaneci paid $8.00 for the win. The mare is owned by Therl Hensley and trained by Peter Redder. She was bred by Kelly Goodwin of Michigan and now has five career wins, three of which have been recorded this spring at Harrah’s Hoosier Park. Her career earnings are now over $50,000 and her career best time of 1:51.4 was taken last summer in Indiana.

Hensley has owned Comaneci since the end of 2020 at Harrah’s Hoosier Park, purchasing the mare privately off the Goodwin family. Comaneci is a half sister to Indiana sired Mildrix, who is also racing this season in Indiana with more than $225,000 in earnings. Their mother, Didrickson, was a successful race mare during her career, earning a mark of 1:52.0 and earnings of nearly $400,000.

Redder and Hensley are off to a hot start this season. They also got their second win of the season in only two starts with JK’s Shining Star on the Thursday card at Harrah’s Hoosier Park. Also driven by Sam Widger, JK’s Shining Star earned the win in 1:54.1, paying $11.40 for the win. The three-year-old daughter of JK Endofanera is a perfect three for three this season and the mile marked a new career best for the filly. Hensley and Redder purchased the filly as a yearling for $13,000 at the Hoosier Classic Yearling Sale from Victory Hill Farm.