Another two-year-old emerged onto the Indiana scene as a winner Thursday, July 21 at Harrah’s Hoosier Park as Coach Wendl and driver Peter Wrenn scored a win in the freshman pacing maiden for colts and geldings. The duo covered the one mile distance in 1:53.1. 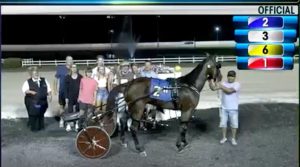 Coach Wendl and driver Peter Wrenn are greeted in the winner’s circle by the connections after his first career win at Harrah’s Hoosier Park Thurs. July 21.

Coach Wendl wasted no time getting straight to the lead from post two and was on top of the field by more than two lengths at the quarter in :27.3. From there, he got a little bit of a breather in the middle fractions of :56.1 and 1:26.0 before picking the pace back up and rallying home in :27.1 for his first win, fending off a big closing kick by Lotsa Knock Us and Jared Finn, who paced their final quarter in :26.4. Mega Clyde and John DeLong finished third.

Coach Wendl was the favorite of the field, paying $3.40 for the win. The Rockin Image freshman gelding is owned by Brian Loman, Chad Wendling and Mark Flessner. Melanie Wrenn trains the gelding, who was bred by Ever Green Acres. It was the fourth career start for Coach Wendl, whose previous best time was 1:58.2 taken at the Illinois State Fair during matinee races. This was his second start over Harrah’s Hoosier Park oval and his first for the Wrenn barn.

Coach Wendl was purchased from the Hoosier Classic Yearling Sale last fall for $15,000. He was one of 64 that sold at auction last year as a yearling by Rockin Image. He was sold under the name DJ’s Sazerac before his name was changed to reflect co-owner Chad Wendling. He is the third foal from the Allamerican Native mare Delta Dawn Hanover, who is also the mother of Faithfuldawn, who took a mark of 1:53.4 earlier this year.

Indiana Sires Stakes action was also on the Thursday card with Ponda Adventure winning the three-year-old colt and gelding trot for Trace Tetrick. The talented Swan for All gelding, trained by Erv Miller, posted his mile in 1:52.4, a final quarter in :27.0. Late Night Hawk and Kyle Wilfong finished second. Swan Captain and John DeLong finished third.

Ponda Adventure, a product of Pond-A-Acres, is owned by Engel Stable of Il, Louis Willinger and Jerry Graham. Ponda Adventure is a perfect five for five this season and his latest win was also a new career best time.