Harrah’s Hoosier Park has featured the claiming ranks in the first week of action for the 29th season of racing, which began a week ago Friday, March 25. Director of Racing Scott Peine designed several events to showcase claimers in different categories, giving the horses a chance to shine on center stage. The Friday, April 1 card will provide five finals set up by preliminary rounds last week, kicking off the night with a very competitive field of 10 in the $16,000 Sycamore for $5,000 claimers. 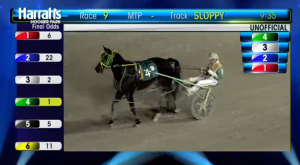 Sadies Art and Trace Tetrick return to the winner’s circle after winning a division of the Sycamore Claiming Series preliminary round Friday, March 25.

One of the favorites in the Sycamore is last week’s divisional winner Sadies Art from the Tom T. Tetrick barn. The Party at Artsplace gelding was a strong gate to wire winner by three and one-quarter lengths in 1:55.1, a final panel in :27.4. The 12-year-old veteran will begin from post six at odds of 5-2 with Trace Tetrick in the bike.

Going up against Sadies Art is other divisional winner from last week Every Play Counts, a 11-year-old gelding from the Ryan Bellamy Stable. The Western Terror gelding won his prelim in similar gate to wire form over a rain-soaked track in 1:57.3. John DeLong is back in the bike with Every Play Counts from post four at odds of 3-1. The Sycamore is slated as the third race on the card.

Another competitive claiming series final will take place in the final race of the night as 10 horses line up for the $20,500 Catholic Cowboy in Race 13. The $15,000 claiming event features another wide-open field, including Beach House from the Jeff Brewer Stable. The Somebeachsomewhere eight-year-old gelding was a winner by three-quarters of a length last week in 1:54.2 over Caribbean King and Travis Seekman. Tetrick is back in the bike as the favorite at odds of 3-1 from post four.

The Catholic Cowboy is also part of the US Trotting Association’s Strategic Wagering. The race features a $10,000 guaranteed Hoosier High 5 pool to close out the Friday program.