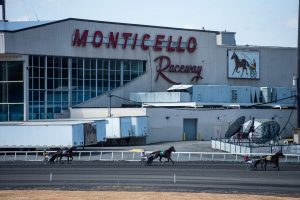 Starting from post two, Cinnamon Stick, driven by Gregory Merton, settled nicely in mid pack as Il Mago and Drew Monti set the first three fractions of :28.0, :57.2 and 1:27.2. Merton was able to save ground for the stretch drive and unleashed Cinnamon Stick in the final quarter, trotting home in :30.1 for the win by one and one-quarter lengths over Chip Chip Conway and Jim Taggart Jr. Il Mago, the favorite of the field, finished third.

Cinnamon Stick paid $7.60 to win. The final time of the race was 1:59.0. He is now trained by Gregory Decker and owned by Michael Mulligan of Liberty, New York. Steve Mast of Middlebury, Ind. bred the Jailhouse Jesse son, who was purchased out of the Hoosier Classic Yearling Sale for $21,000 by S & R Racing Stable. After racing in Indiana as a two-year-old, he was sold out East and has remained in New York for the past three years. To date, he has 23 wins in 96 starts with purse earnings in excess of $132,000. The best time for Cinnamon Stick was recorded as a three-year-old at Saratoga Harness in a time of 1:56.4.