Multiple Sires Stakes champion, track record holder and Indiana trotting sensation Churita left little to doubt as she rolled to a seven and one-quarter victory in the $20,000 Frank O’Mara Memorial Final at Harrah’s Hoosier Park Saturday, April 20. The shortened program, which began early to lead into the Rick Springfield concert, put the spotlight on the now seven-year-old mare owned by Porterproffessionalservice of Michigan and trained by Matt Rheinheimer. 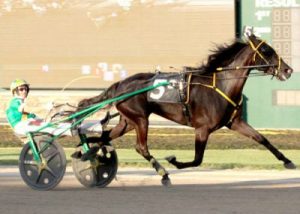 With regular pilot Trace Tetrick at the controls, Churita followed Gloire Dream and John DeLong through the early stages before taking over at the top of the stretch and rallying home for the win in 1:53.3. Trotting Grace and Sam Widger and Hititoutofthepark and Todd Warren, both longshots, finished second and third respectively.

Bred by Devon Chupp, Churita’s win was the 40th of her career in 91 starts. The Airzoom Lindy trotting mare is closing in on $1 million in purse earnings with more than $924,000 in earnings. Her career best time was taken last year at six in a time of 1:51.4. It was one of three wins on the card for Tetrick.

Earlier in the evening John DeLong guided Jazzy Image in a near gate to wire effort to win the $16,000 Josh Whitelow Memorial Final. Trained by Trent Stohler, Jazzy Image was a three and one-half length winner in 1:52.2. The longshot winner paid $12.20 for Trent Stohler Stable. The Rockin Image five-year-old mare picked up her 16th career win and increased her bankroll to more than $168,000.