It was a field of six tough older trotting mares that kicked off Super Night at Harrah’s Hoosier Park Friday, Oct. 11. World Champion Hannelore Hanover’s career is winding down and most likely, made her last start in her home state in the second race of the night, the $70,000 Indiana Sires Stakes for older trotting mares. But at the end, it was Churita who scored the win in a time of 1:54.1 over a track rated good due to rain. 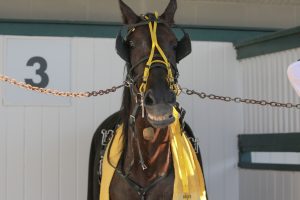 Churita has a lot to smile about. She is the sport’s newest millionaire following her Indiana Sires Stakes Championship win Friday Oct. 11 at Harrah’s Hoosier Park. Photo by Dean Gillette

Starting from post three, Churita and Trace Tetrick rallied right to the lead to be the fraction-setter of the field, passing by the quarter in :27.2, half in :57.0 and three-quarters in 1:26.2. Hannelore Hanover and Yannick Gingras followed along in the third spot most of the mile before being tipped out first over around the final turn. In the stretch, it was a battle between Churita and Hannelore Hanover. Coming down to the wire, Churita had the stronger stride to reel in the win in 1:54.1. by one and one-half lengths, a final quarter in :27.4. Hannelore Hanover trotted home in :27.3 for second over Compelling and Verlin Yoder who maintained ground to finish third.

The win for Churita was her 43rd of her career but more impressively, it was just enough purse earnings to push her over the $1 million mark. The quickest career time for the seven-year-old daughter of Airzoom Lindy was taken last year at six at Harrah’s Hoosier Park in a time of 1:51.4. Despite finishing in the top three 13 of 19 starts for 2019, she rewarded her backers with prices of $18.40, $3.60, $2.40 across the board. Porterproffesionalservice of Michigan owns the talented trotting mare that was bred by Devon Chupp. Matt Rheinheimer trains Churita.

In the older trotting horse ranks, Bridge to Jesse’s proved he’s just as tough as he was at two, scoring the win in the $70,000 Indiana Sires Stakes Championship for older stallions and geldings. The son of Jailhouse Jesse moved to the lead after the quarter mile time was set by Bluebird Rambo and Brandon Bates and never looked back, striding out to a three and one-half length victory for driver Tetrick. The time of the mile was 1:53.1 with a :27.4 final panel over a track that was downgraded to sloppy due to increasing rain. Got the Groove and John DeLong finished second over Born to Thrive and Rick Plano for third.

The win for Bridge to Jesse’s was his 39th trip to the winner’s circle for William C.. William P. and Ray DeLong along with Roger Welch. Welch also trains the Indiana bred six-year-old who now has in excess of $910,000 in career earnings. Bridge to Jesse’s took a new career mark earlier this season in 1:51.1 at Harrah’s Hoosier Park.