Chip for Real became the latest winner for Robert Wyman Saturday, Sept. 21 at the Jay County Fairgrounds. The three-year-old gelded son of Hypnotic Blue Chip rallied first over with Alex Udell in the bike and lengthened his stride all the way to the wire, winning by three lengths in a new career best of 1:56.3 over the half-mile oval. Owned by Wyman’s Long Shot Racing Stable of Nappanee, Ind., it was the second win of the year for Chip for Real. 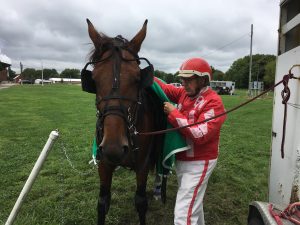 Trainer Robert Wyman prepares one of his trotters for action at the Shelby County Fairgrounds in 2018.

Wyman, who is the minister at North Webster Church of the Brethren, has been involved in racing since the 1970’s, starting in the Trottingbred industry first and then converting over to Standardbreds. At the age of 83, he is still actively training and driving on the Indiana Sired Fair Circuit and even makes a trip once in a while to Harrah’s Hoosier Park to race. Chip for Real, a private purchase earlier this season, has only missed one check since joining the Wyman barn at the Elkhart County Fairgrounds. The sophomore has been officially timed in 1:53.1 earlier this season at Harrah’s Hoosier Park. It was the 15th win of the season for Wyman.

Other big winners on the 22-race Saturday program at Portland included the team of Joey Putnam and Justin White who scored seven wins on the card. Driver Mike Peterson also recorded a four-win day on the program.