Charm N Caesar, the Indiana sired trotter previously owned, bred and trained by Jack Kieninger, was a winner again at Northfield Park Wednesday, Feb. 2. The gelding won in 2:01.4 over the sloppy track. 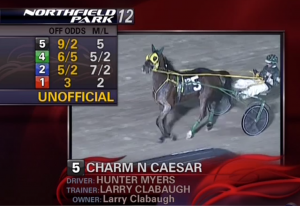 Charm N Caesar and Hunter Myers return to the winner’s circle Wed. Feb. 2 for their second win of 2022 at Northfield Park.

Starting from post five in the reduced field of six, Charm N Caesar and Hunter Myers got away third as Baby Yoda and Kurt Sugg set the early fractions of :29.4 and 1:01.0. Going to the three-quarters, Charm N Caesar was prompted to the outside by the outer flow of horses and made a bold move toward the front, passing by the three-quarters in 1:31.1. From there, he opened up on the field and was an easy winner by two and one-quarter lengths over Fulton’s Fury and Keith Kash Jr. for second. Baby Yoda finished third.

Charm N Caesar paid $11.40 for the win. It was one of three wins on the card for Myers, who drove for owner-trainer Larry Clabaugh. The Waldorf Hall gelding has now won two of his four starts for 2022 and has not been worse than third in all of his outings this year. Overall, he has five career wins with his best time scored in his previous start at Northfield Park in 1:58.4.

Charm N Caesar is now the second quickest foal by Waldorf Hall, following No Lingering on the list of limited foals. His dam, Charm’N Barbie, took a mark of 1:58.2 during her career and has four foals of racing age. Charm N Caesar has a three-year-old full brother, Paininthetush, this season as well as a two-year-old full sister, Charm’N Izzy. He also has a weanling half sister by Newtown Choclatier named Fancy Sassy Chassy, who will be in training in 2023.

Charm N Caesar, now four, competed on the Indiana Sired Fair Circuit at two and three before being sold and relocating to Ohio.