According to a post on social media by Harrah’s Hoosier Park, Trainer Charlie Morgan checked up his last horse as a trainer during closing night of the 2019 racing season in Indiana. Morgan, a native of Laura, Ohio, sent out his final starter in the second race of the night, the $25,000 Peony Late Closer Final and his Glorious Nite came home a winner. 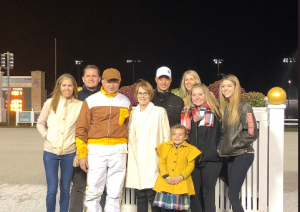 Glorious Nite, driven by the track’s top driver Trace Tetrick, made a move down the backstretch to the lead and held steady all the way to the wire, winning by three lengths as the favorite of the race. Dojea Rita and Ross Leonard finished second over J Rockin B and Michael Oosting for third. The time of the mile was 1:52.1.

Owned by breeders Phyllis Grozich and Paula Kind of Illinois, Glorious Nite earned her eighth win of 17 starts in 2019 for Morgan. The four-year-old daughter of Always a Virgin was unraced at two and made her first career start at the end of her three-year-old season. She now has nearly $60,000 in purse earnings and took a mark of 1:50.2. earlier this year.

The win was the 207th trip to the winner’s circle for Morgan, who began training in 1991. He has shipped over and even stabled at times at Hoosier Park and Indiana Downs since the beginning and completes his career with more than $1.2 million in purse earnings as a trainer. He started driving in the 1970’s and was especially successful with young horses such as Kingdom Way, Ms Mighty Nite, A Nite to Remember, Franki Dancer and Seasoned Saint.

Morgan was joined by friends and family, including his wife, Dot, in the winner’s circle for the victory with Glorious Nite. Dot is the main force behind New Vocations Racehorse Adoption program that has placed hundreds of horses from the Indiana tracks over the past two decades.