Anytime there are six horses across the track at the finish line, racing fans know they have just witnessed a great horse race, and that’s what they saw in the 28th edition of the $325,000 Dan Patch Stakes Friday, Aug. 13 at Harrah’s Hoosier Park, presented by Brittany Farms. Catch the Fire and Scott Zeron were able to squeeze through at the right time to get the win in 1:48.1. 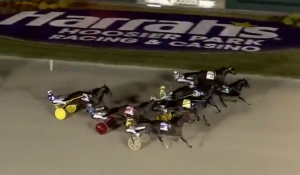 Six horses were across the track vying for the title in the Dan Patch Stakes at Harrah’s Hoosier Park Friday, Aug. 13 with Catch the Fire slipping through in the center of the track for the win by a neck.

Several horses went out for the lead from the start, with Workin Ona Mystery passing by the quarter in :25.3. Cattlewash and David Miller were on the outside to take over, but by the time the half arrived, there were two other horses who had the lead, making four leaders before the half mile marker in :54.1. Around the turn, the outer flow was alive with challengers, putting local favorite Little Rocket Man and John DeLong in second over fashion.

In the stretch, horses fanned out across the track and Little Rocket Man was a serious contender for the final charge to the wire. Tellmeaboutit and Michael Oosting also joined the chase late, flying up on the outside but just missed winning the race as Catch the Fire surged through in the middle of the pack for the win by a neck in 1:48.1. Tellmeaboutit, who paced home in :25.2, finished second in the six-horse photo while Backstreet Shadow and Trace Tetrick were third, just a half-length ahead of Little Rocket Man who finished fourth. Tellmeaboutit was the longest shot on the board at 68-1 while Backstreet Shadow was also a longshot at 11-1.

It was the seventh win in 10 starts Catch the Fire in 2021. He nearly doubled his earnings this year and now has in excess of $340,000 for 2021. His best time remains at 1:47.2 taken earlier this month at The Meadowlands. Todd Luther trains the four-year-old son of Captaintreacherous, who became the sports newest millionaire with the win in the Dan Patch Stakes. He is owned by Black Magic Racing and C T Stables, both of Ohio. Dr. Fred Kruszelnicki of Alberta, Canada is the breeder on the standout athlete.

Catch the Fire was greeted in the winner’s circle by Joe Morris, Senior Vice President of Caesars Entertainment Racing, and Rick Moore, Vice President and General Manager of Racing at Harrah’s Hoosier Park for the trophy presentation.

Earlier in the evening He’zzz a Wise Sky and John DeLong stunned the co-featured $51,000 Gregg Haston Memorial with a big effort to win a close photo in 1:49.1. Starting from post eight, He’zzz a Wise Sky rallied out to challenge for the early lead and was left three wide at the quarter in :25.4 before continuing his pursuit of the top spot. Dojea Gizmo and Scott Zeron finally crossed over down the backstretch, but still left He’zzz a Wise Sky in the outer lane past the half in :53.3. He’zzz A Wise Sky finally got the crossover he was seeking in the third quarter and had a solid hold of the top spot heading for home.

Franco Totem N and Michael Oosting made a big move in the stretch to close in late but He’zzz a Wise Sky held him of to win by a neck. Tivo Hanover and Brandon Bates stayed close throughout to finish third, despite some interference at the three-quarter mile marker.

He’zzz a Wise Sky paid $30.40 for the win. The four-year-old Yankee Skyscaper is owned by Triple ZZZ Stable and trained by John Filomeno.

Dan Patch Stakes night had the typical fanfare with TVG’s Dave Weaver trackside covering the event. Gabe Prewitt and Bob “Hollywood” Heyden both added on-air racing support, joining Emily Gaskin and track announcer Michael Chamberlain to present a full television production of the event. The horses came out of the front paddock to the sounds of “Back Home Again in Indiana” sung by Sharon Beeman, member of the racing office staff at Harrah’s Hoosier Park.

Randy Hatton’s Topville Alexander kicked off the card in the $24,000 Johnny Wattles final with a surprise win in 1:53.2. The two-year-old son of JK Endofanera, driven by Dale Hiteman, paid $34.00 for the win. Hatton owns and trains the freshman gelding.