An early post time brought some quick miles, including a surprise victory by Castle Flight and LeWayne Miller in the $20,000 Open Pace. Included in a field of champions, Castle Flight was overlooked by everyone but was able to storm home and stop the timer in 1:47.2 to equal the current track record at Harrah’s Hoosier Park in a time of 1:47.2. The time matched the previous mark set by Sweet Lou and Ron Pierce during the 2014 $258,000 Dan Patch Invitational. 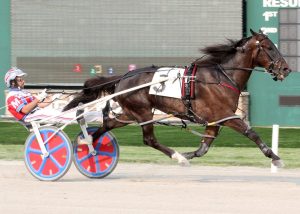 Castle Flight and LeWaye Miller soar to victory in the $20,000 Open Pace with a track record setting performance in 1:47.2 Friday, May 31. (Photo by Linscott Photography)

Starting from post three in the field of eight that included the powerhouse performers Beckhams Z Tam, Always A Prince and Freaky Feet Pete, Castle Flight followed along the inside in third as Always A Prince and Trace Tetrick established fractions of :26.2, :53.2 and 1:20.2. Fan of Terror was riding in the pocket behind Always A Prince.

As the field turned for home, Castle Flight found racing room and surged to the lead, winning the race by two and three-quarter lengths with a final panel in :26.1. Beckhams Z Tam and Ricky Macomber Jr. closed in :25.4 but could only finish second while Always A Prince maintained ground for third. All eight horses in the race paced under the 1:50 time barrier.

Owned by Michael Casalino Jr. and trained by Dylan Davis, Castle Flight paid $58.20 to win in the upset. It was a new career best for the seven-year-old Indiana sired son of Panspacificflight, who now has 27 career wins in 141 career starts and earnings in excess of $276,000.

The early post time was held to make way for the concert titled RBRM featuring R & B Pop musicians Ronnie DeVoe, Bobby Brown, Ricky Bell and Michael Bivins, who were part of New Edition and Bel Biv Devoe in their younger years.