The Morristown community and surrounding towns received devastating news recently when Quinton Batton, a senior at Morristown High School, was diagnosed with leukemia. Carson Conrad, who is a sophomore at Morristown and a teammate of Batton, is working hard to show his support of his friend, even when he’s on the racetrack. 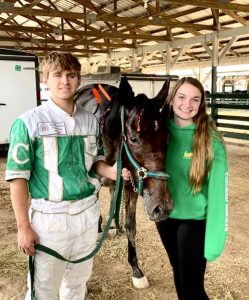 Carson Conrad and Karli Manship, both students at Morristown High School, stand with Zig Zag Zoom, who raced with orange ribbons in her hair Saturday, Sept. 25 at the Harrison County Fair to show support for fellow student Quinton Batton, who was recently diagnosed with leukemia. Photo by Sarah Conrad

“I put orange ribbons in my filly’s mane today to show support for ‘Q’,” said Carson, who was making his first official drive at the Harrison County Fair. “Orange is the color to represent leukemia, and I’m doing all I can to help.”

Carson and Quinton are on the basketball team at Morristown. With the recent diagnosis, Quinton is expected to be away from the court this season. Recently a GoFundMe page was set up for him and his family. In addition, several area high schools are selling t-shirts, wearing orange ribbons and posting messages on social media to support Quinton. It’s only fitting Carson is right in the middle of showing how much his teammate means to him and his community.

Carson, who is only 16, received his fair and qualifying license earlier this year and earned his first win with his filly, Zig Zag Zoom. The Indiana Sired Fair Circuit (ISFC) made a stop at the Harrison County Fairgrounds Saturday, Sept. 25, giving Carson and Zig Zag Zoom the opportunity to race over the oval that has long been associated with the Conrad family.

Carson and Zig Zag Zoom finished third in the first race of the day in the two-year-old filly pace. Later on, Carson assisted with several blanket presentations to winners, including the Elmer Conrad Memorial to honor his late great, great, great grandfather.

Following the races, the Conrad Stable provided food for those who raced at the ISFC stop. The fairgrounds sets just over the river from historic downtown Corydon.