The Conrad name has long been associated with Indiana harness racing and a new name has just been added to the list. Fourteen-year-old Carson Conrad made his first matinee start at the Darke County Fairgrounds in Greenville, Ohio. The start for the young Conrad makes the fifth generation of Conrads to sit behind a Standardbred. 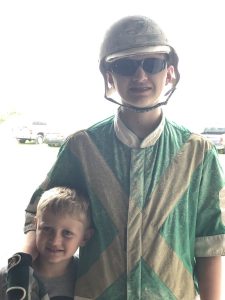 Carson Conrad and his younger brother Carder are pictured during Carson’s first matinee drive at the Darke County Fairgrounds. (Photo by Sarah Conrad)

Carson has long been seen around his father, Charlie’s, barn, both at Harrah’s Hoosier Park and on the Indiana county fair circuit. He has been jogging horses at the family farm for several years. It was only a mater of time to see him slip on the green and gold colors of the Conrad Stable. He has been an owner nearly all of his life and now owns several horses with his younger brother, six-year-old Carder.

In addition to his interest in harness racing, Carson is also active in sports, especially on his school and club basketball teams.

Carson is one to watch for the next generation of drivers in the state of Indiana. And, his brother, Carder, probably isn’t far behind.