Captain Sonny Fox made his third career start a winning one Friday, May 28 at Harrah’s Hoosier Park. In only his second start of 2021, the sophomore trotting gelding won the $7,500 Indiana Sired Mini Series in 1:57.1. 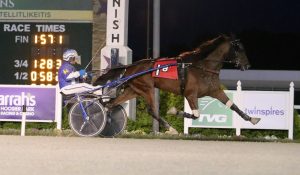 Starting from post one, Captain Sonny Fox and driver Dale Hiteman used just enough speed to get a good seat near the leaders early as Ivana Vinalot and Trace Tetrick trotted out to the lead through fractions of :27.3, :58.2 and 1:28.3.

In the stretch, Captain Sonny Fox found room and trotted home in :27.4 to earn the victory by one and three-quarter lengths over Alongcamespider and Jay Cross, who closed from the back of the pack for second. Lonestar Herbie and Doug Rideout completed the trifecta of trotters for third.

Captain Sonny Fox was a mild surprise to bettors, paying $11.40 for the win. The three-year-old son of Musclesprinctonian is owned by breeder Sally Gilbert of Georgia, who also trains the gelding. He is also the son of the outstanding trotting mare, Hoosier Jewel, who was campaigned by Gilbert and the late Mel Gilbert to 17 wins in 62 starts and earnings in excess of $177,000. Her quickest time was taken as a seven-year-old in 1:55.1 at Harrah’s Hoosier Park.

Captain Sonny Fox is the latest foal from Hoosier Jewel, who also only started once as a two-year-old before returning to the track for a stellar sophomore season. He is a half brother to Captain John Henry, winner of more than $300,000 for Gilbert with a mark of 1:53.3. Hoosier Jewel has been a solid brood mare for Gilbert with all five foals taking records and earning at least more than $20,000, with Captain Sonny Fox heading to that category with his latest win.

Musclesprincetonian, a son of Muscle Hill, took a mark of 1:55.3 during his career. He has stood in Indiana with four crops out. His oldest foals are now four-year-olds. In all, there are 31 foals with 11 of those as registered starters, five of which have taken marks under the 2:00 time barrier with Captain Sonny Fox being the latest to join the list.