Cantab Superstar has emerged from a tough start in life to now a race winner. The two-year-old trotting colt rallied home Tuesday, July 19 for a win in 2:08.4 to record his first trip to the winner’s circle. 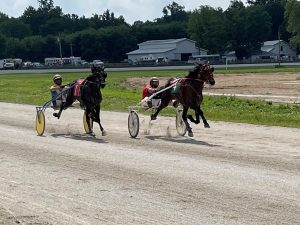 Cantab Superstar and Gerald Miller fend off MJR Jessie’s Jet and Bradley Ferguson en route to their first victory in the ISFC Tuesday, July 19 at the Shelby County Fairgrounds. Photo by Tammy Knox

Trained by Tim Gilliland, Cantab Superstar was driven right to the lead by Gerald Miller in the first division of freshman trotting colts and geldings on the Indiana Sired Fair Circuit. The Mr Cantab gelding was a strong leader early on, paving the way for his opponents in fractions of :33.0 and 1:05.0 before feeling some pressure from Bradley Ferguson and MJR Jessie’s Jet. Into the far turn, the two were battling for positioning, and as they turned for home, they matched each other’s stride for the entire length of the stretch before Cantab Superstar held his ground on the inside for the win by one length over MJR Jessie’s Jet. Golden Prince and Jordan Ross recovered from a break before the quarter to move up to third.

Cantab Superstar is owned by Nat and Patty Hill, who also bred the gelding from their mare Garland Superstar. He had complications after arriving at the Hill farm in Bloomington and spent the first week of his life at Purdue University under constant care. However, he has recovered fully and is now a winner for Garland Superstar. He is a half brother to Muscular Superstar, who took a mark of 1:55.4 and earned more than $45,000 and raced up until last season. Garland Superstar has had all three foals make it to the races.

The grand dam of Cantab Superstar is Mary’s Superstar, who was also campaigned by the Hills. She was a Genesis Series winner at Hoosier Park at the turn of the century under the direction of trainer Bill Bridges and was a contender in Indiana Sires Stakes action during her career. Her mother, Mary’s News Girl, was also campaigned by the Hill family, noting four generations from their breeding operation. Mary’s News Girl raced at Hoosier Park during the inaugural season of competition in 1994 and was driven to several victories on both the Ohio County Fair Circuit and Indiana County Fair Circuit by Indiana Hall of Fame legend Jerry Landess.

Cantab Superstar’s win on the day was the quickest of the two-year-old trotting colts and geldings. The other division was won by Asliveroffashion, owned, trained and driven by Mike Peterson. The Crescent Fashion colt moved out to challenge at the three-quarters and fended off A Majorsmackin and Jordan Ross deep in the stretch for the win in 2:12.3. Swan Factor and Michael Detweiler finished third. It was the first career win for Asliveroffashion as well in his fourth career start.

In the three-year-old pacing ranks, Babe’s Darla got back on the winning track with her fifth win in nine starts this season. The Straight Shooting sophomore was unraced at two, but has come along nicely this season for trainer Carl Newland and driver Jordan Ross. Hartley Farms of Fremont, Ohio own the filly, who won her division convincingly in 2:00.0, a final quarter in :28.2.

“She’s very sweet and good gaited,” said Ross. “She gets over a smaller track really good. I like driving her and get along well with her. She’s a lot easier to drive than her brother (Babe’s Shooter).”

Babe’s Darla is currently leading the standings for sophomore pacing fillies and is destined for a spot in the Governor’s Cup Championships at the Indiana State Fair next month. The Quest for the Governor’s Cup continues at the Elkhart County Fairgrounds in Goshen this weekend with three days of racing slated for Saturday, July 23, Monday, July 25 and Tuesday, July 26.