Bumblebzbuzz scored another win Thursday, March 11 at Isle of Capri Pompano Park. It was one of two wins on the card for driver Andy Shetler, who also trains Bumblebzbuzz. 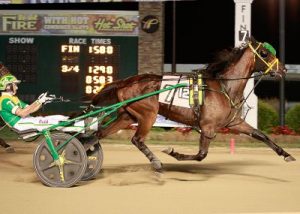 Bumblebzbuzz, shown as a three-year-old with Trace Tetrick, is on a roll at Pompano this year for trainer-driver Andy Shetler, winning his third win of the year Thurs. March 11. Photo by Linscott Photography

Bumblebzbuzz had the inside post and left the gate with intentions to get to the lead, but several other horses used early speed and Shetler opted to sit in third through the first quarter in :28.0. As soon as the field turned into the stretch for the first time, Shetler had the Pinetucky gelding out and rolling, securing the half in :57.0 on the front end.

Around the final turn, Wally Hennessey had Starlit Thiswanday on the outside to challenge. The two went head to head for a few strides before Bumblebzbuzz took over and was a winner by one length in 1:56.1. Glide in the Wind and David Miller moved up late for second over Starlit Thiswanday for third.

Owned by Janie Hartley of Richmond, Ind., Bumblebzbuzz, a former Indiana Sires Stakes Super Final winner, was the favorite of the field, paying $3.80 for the win. The seven-year-old Indiana sired gelding now has three wins in nine starts for 2021. His career best time stands at 1:53.4, taken as a three-year-old at Harrah’s Hoosier Park. He was bred by David Wayne Wagler and Roman Stoll. Bumblebzbuzz now has 15 career wins in 123 career starts with earnings over the $187,000 mark.

Shetler also connected in the very next race with a catch drive for George Anthrop. Fred and Roz, a five-year-old gelded son of Indiana sire Fred and Ginger, scored the gate to wire win in 1:52.3. He is owned by Geno Sullivan of Illinois and was bred by Joe, Carol and Robert Kilburg of Iowa. The win was a new career best for the gelding, who now has nine career wins in 50 career starts and earnings over the $39,000 mark.