Bumblebzbuzz, the Indiana sired son of Pinetucky, scored a win in conditioned trotting action Tuesday, Jan. 25 at Isle of Capri Pompano Park. Trained and driven by Andy Shetler, Bumblebzbuzz scored the win in 1:57.0. 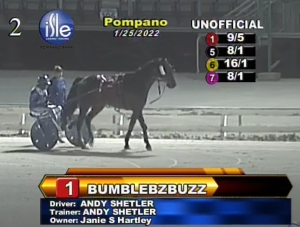 As the gate folded, five horses left for the lead with Bumblebzbuzz and Shetler holding their own from post one. By the time the field had reached the first turn, they were down to three across the track with Wesley Hanover the widest of all and eventually landing on the lead after the quarter in :28.1. Shetler wasted no time getting Bumblebzbuzz back out and moving, easily taking over the lead before the half in :57.4. They continued to control the tempo through three-quarters in 1:27.1 as Manwilling and Rick Plano moved up to challenge on the outside.

In the stretch, Bumblebzbuzz held strong on the inside, trotting home in :29.4 for the win by one and one-half length over Manwilling. Wesley Hanover finished third with John MacDonald in the bike.

Bumblebzbuzz was one of the favorites, paying $5.80. The eight-year-old gelding is owned by Janie Hartley of Indiana, who has owned him for the past two and one-half years. He was bred by David Wagler and Roman Stoll.

Bumblebzbuzz earned his first win of 2022 in his fourth start of the season. He has raced every year and scored at least one win. He now has 17 wins in 149 starts and his latest win moved him over the $200,000 career earnings mark. His career best time remains at 1:53.4 taken as a three-year-old at Harrah’s Hoosier Park.