Brookview Bullet has shot to the top of most racing fans’ list for two-year-olds to watch in Indiana this season. The son of Always a Virgin came out in his first career start and won by eight lengths in 1:52.2, a final panel in :26.2. From there, he returned in the Hoosier Stake at the Indiana State Fairgrounds for another dominant win two weeks later. His latest win was a victory in Indiana Sires Stakes action in a time of 1:51.2. 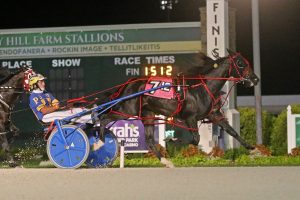 Brookview Bullet was driven by Joey Putnam in his record setting mark Friday, Aug. 28. He sat patiently behind opponents before moving out in the stretch to roll home the winner by nearly two lengths. The win proved he doesn’t have to be on the front end, as he did in his first two wins this season and showing some depth to the Justin White-trained freshman gelding.

Brookview Bullet is owned by Eleven Star Stables of Portland, Ind. He was bred by Brookview Farms of Shipshewana, Ind. He was a $12,500 purchase at the Hoosier Classic Yearling Sale last fall. He is from the 100 percent producing mare Babylon Sister, who now has all six foals with at least double digit earnings and records of 1:56.1 or quicker. Brookview Bullet had a half-sister born earlier this year by Check Six named Brookview Dixie, who will be on the track in 2022.

Recognizable on the track with his all red harness, Brookview Bullet’s latest win is one of the top 10 performances by a two-year-old pacing colt or gelding in 2020. Indiana sired Rogers Image, a son of Rockin Image trained by Ron Burke, joins Brookview Bullet as a top 10 performer in the nation this year, also scoring a win at Harrah’s Hoosier Park in 1:51.2.