It was a race to the wire as Brookview Bryant and Josh Sutton made the fourth race of the day Tuesday, Feb. 22 an exciting event. The duo rallied up late for the win by a nose as the next to longest shot in the conditioned claimer at Miami Valley Raceway. 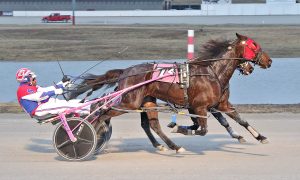 Starting from post seven, Brookview Bryant rallied out early and secured the spot behind race leader, fellow Indiana sired Flying Image, driven by Kayne Kauffman. The first fraction was set at :28.2 before Idrinkbecauseofyou and Dan Noble came into the picture to take over at the half in :58.3. By the three-quarter pole, Brookview Bryant had been flushed out to challenge after being shuffled back to third on the inside.

In the stretch, Brookview Bryant began to close in on Idrinkbecauseofyou and never gave in, rallying home in :29.4 for the win in 1:57.2. Flying Image finished third.

Brookview Bryant was a big surprise in the race, paying $63.20 for the win. The four-year-old son of Always a Virgin is trained by Henry Graber Jr. and owned by Two Star Stable LLC, who acquired the gelding in early December. Lyle Slabach bred the Indiana sired son of Touched by Ted, who took a mark of 1:52.4 and earned $66,000 before moving to the brood mare ranks.

Brookview Bryant was purchased from the Michiana Classic Yearling Sale for $4,700.