Two Swan for All sophomores have been trading places this season. They were matched up again in the sixth leg of the Indiana Sires Stakes (ISS) for three-year-old trotting colts and geldings and once again, finished one-two. 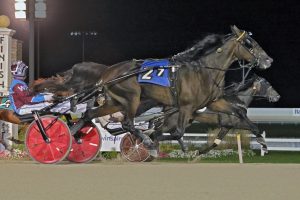 Brookview Bolt and Sam Widger edge out Swingforthefences and Peter Wrenn in the sixth round of Indiana Sires Stakes action Thurs. Sept. 2 at Harrah’s Hoosier Park. Photo by Dean Gillette

In the stretch, Swingforthefences made a move up the inside to try to overtake Brookview Bolt, but he would not back down, winning the event at the wire in 1:54.0, just a nose ahead of Swingforthefences. Breckenridge and Dan Shetler finished third.

Brookview Bolt is now six for 10 this season. His win brought him just over the $300,000 mark in lifetime earnings for trainer Ron Burke and owners Burke Racing Stable, Knox Services, J & T Silva-Purnel & Libby and Weaver Bruscemi. Brookview Farms of Shipshewana, Ind. bred the gelding, who is the first foal out of the good race mare Witty’s Winner, who earned nearly $100,000 during her career with a mark of 1:54.4. She now has three other foals, including Chief Ring Master, who has a qualifying mark this season as a two-year-old of 2:00.4. Brookview Bolt was a $52,000 yearling purchase from the Hoosier Classic Yearling Sale.

Later in the card a second division of ISS action took place for sophomore trotting colts with Illini Earl and Brandon Bates scoring the win. Trained by Walter Haynes Jr., the Jailhouse Jesse gelding earned his fifth win in 18 starts for 2021 in the effort. Bred by the University of Illinois, Illini Earl earned the win in gate to wire fashion in 1:55.3. Monarch and James Yoder finished second over Bluebird Yoshi and Peter Wrenn for third.

Illini Earl is owned by Jeff Fought Racing, Brian Carsey and John McGill. He was an $11,000 yearling purchase from the Hoosier Classic Yearling Sale.