Two divisions of the Bruce Nickells H.O.F. Pace for fillies and mares were the featured event on the Friday, Oct. 2 program at Harrah’s Hoosier Park. A new invader into Indiana was a strong winner in the second division as Brooke’s Ocean and Brandon Bates rallied home for the win in 1:52.3. 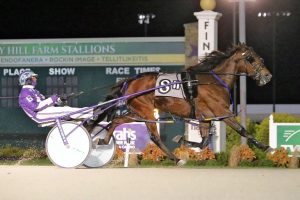 Brooke’s Ocean made her Indiana debut a winning effort Friday, Oct. 2 in a division of the Bruce Nickells H.O.F. Pace. Brandon Bates was in the bike. Photo by Dean Gillette

With an outside post eight in the nine-horse lineup, Brooke’s Ocean didn’t even try for an early lead with Alwaysrockwithroll and Jared Seekman got the first call in :27.0. Baby Lets Roll and Joey Putnam, coming in off the Indiana Sired Fair Circuit, then made the front to establish middle fractions of :55.2 and 1:24.4.

In the stretch, Brooke’s Ocean began her attack, pacing home in :26.3 to win by four and one-quarter lengths. Baby Lets Roll finished second over Velvet Joy and Sam Widger for third.

A surprise to Hoosier Park fans, Brooke’s Ocean paid $16.40, $5.80, $5.00 for the win. The three-year-old Real Desire filly is owned, bred and trained by Michele Weinmann of Carrollton, Ill. The Indiana sired filly has been nearly perfect before relocating to Harrah’s Hoosier Park. She won seven of eight races at Hawthorne Racecourse this summer before picking up her win in the Nickells H.O.F. Pace. The only race she hasn’t won all year was when she made a break after the start and did not finish the race.

With only one start at two, Brooke’s Ocean has come back with an amazing sophomore campaign. Her win in her first start outside of Hawthorne marked a new career best for the filly. She now has in excess of $30,000 and has yet to compete in a stakes race for Weinmann and Bates, who has been in the bike for all nine of her starts this season.

In the other division of the Nickells H.O.F. Pace, Cheek Please and LeWayne Miller used similar racing strategy, coming off the pace for a big stretch drive to win in 1:51.3. The American Ideal three-year-old was a two-length winner over Meggie May I and Ryan Ver Hage while Comaneci and John DeLong finished third.

Cheek Please is owned by Jay Hochstetler of North Carolina and Finkelberg Racing of Mississippi. Unraced at two, she now has five wins in 12 starts. Her latest race win marked her career best and she now has in excess of $38,000 in earnings. Homer Hochstetler trains the filly who raced in New York until mid-September when she transferred to Hochstetler’s Indiana string.