Fresh off his 3,000th driving win the night before, John DeLong guided Bridge to Success to victory in a division of Indiana Sires Stakes for three-year-old trotting colts and geldings Thursday, July 8. The duo trotted home in :27.1 for the win in 1:53.4. 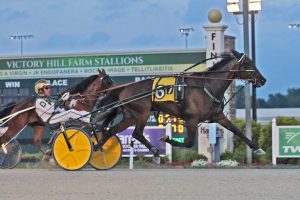 Bridge to Success took a new lifetime mark in Indiana Sires Stakes action Thursday, July 8, his first win of the year. John DeLong was in the bike. Photo by Dean Gillette

Bridge to Success, the younger brother to millionaire trotter Bridge to Jesse’s, got away near the back of the pack in the seven-horse field as Bluebird Maverick and Dale Hiteman moved to the lead at the quarter followed by Breckenridge and Dan Shetler, who set the half time in 1:54.0. The tempo remained event until the field reached the stretch.

Bridge to Success moved out in first over fashion and was ready to pounce on the leaders in the stretch. The Jailhouse Jesse gelding took over and was a winner by one and one-half lengths over Breckenridge and Bluebird Maverick.

Bridge to Success paid $8.20 for the win. He is trained by Roger Welch for owners William and W. Patrick DeLong and Roger Welch. Michael and Randy Wilt of Missouri bred the gelding.

Bridge to Success earned his first win of the season. The race also marked a new career best for the sophomore, who now has in excess of $197,000 in earnings.

Brookview Bolt and Sam Widger were winners in the other division of the ISS. After sitting second during the mile behind Swingforthefences and Trace Tetrick, Widger popped Brookview Bolt out of the hole in the stretch and trotted home in :26.3 to win by two lengths. Predator and Prey and Jared Finn rallied up late for second followed by Swingforthefences.

Brookview Bolt scored the win in 1:53.1, a new career best time. The Swan for All gelding is now three for five this season and moved his career tally to more than $231,000 with the win. Erv Miller trains for owners Burke Racing Stable, Knox Services, inc., J & T Silva-Purnel and Libby, and Weaver Bruscemi.