Bridge to Jesse’s, driven by John DeLong, got the edge over Fiftydallarbill and Trace Tetrick in the $20,000 Open Trot at Harrah’s Hoosier Park Wednesday, April 24. The six-year-old son of Jailhouse Jesse trotted home in :27.1 to earn the victory by one and one-quarter lengths in 1:53.2. 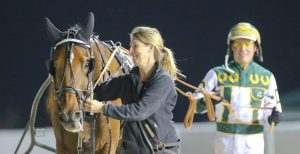 Bridge to Jesse’s shown with Amy Welch and John DeLong from a race in 2017, scored a win in his 2019 season opener April 24 at Harrah’s Hoosier Park. (Photo by Dean Gillette)

In a star-studded cast of Indiana sired entrants for the evening’s featured race, Satin Dancer and Michael Oosting had the lead at the quarter mile marker in :27.2 before Buzz and Ricky Macomber Jr. rolled to the front at the half in :57.0. That moved started an outer flow of traffic toward the lead with Fiftydallarbill leading the way first over.

In the stretch, Fiftydallarbill had taken over the front half of the field, but Bridge to Jesse’s who picked up cover behind Fiftydallarbill, came trotting strong in the latter stages of the race for the win. Custom Cantab and Peter Wrenn rounded out the trifecta with a closing effort.

Owned by William, Patrick and Ray DeLong and Roger Welch, Bridge to Jesse’s, a former divisional champ in Indiana, was making his first start of 2019. The win in his seasonal debut was the 35th overall in 69 career starts. Bridge to Jesse’s boosted his career bankroll to more than $808,000.

Earlier in the night, DG’s Caviar kept his record perfect by winning the $15,000 Cardinal Final. Guided by trainer-driver Andy Shetler for owner Daniel Graber, the Prime Time Caviar gelding trotted near gate to wire for the two and one-half length win in 1:55.2.