Bridge to Jesse’s and John DeLong proved another year older has not slowed them down. The duo scored the win in the evening’s featured $20,000 Open Trot at Harrah’s Hoosier Park Saturday, April 24. 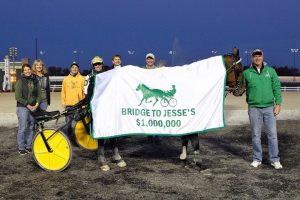 Bridge to Jesse’s added to his millionaire status Saturday, April 24 with his first win of 2021. The eight-year-old is trained by Roger Welch and driven by John DeLong. Photo by Dean Gillette

A bit of a surprise to bettors, Bridge to Jesse’s paid $23.20 for the win. The eight-year-old Jailhouse Jesse gelding is owned by William DeLong, W. Patrick DeLong, Roger Welch and Ray DeLong. Michael Wilt and Randy Wilt bred the highly decorated trotter, who scored his first win of 2021 in the race. Trained by Welch and cared for by Amy Welch, Bridge to Jesse’s now has 47 career wins and more than $1 million in earnings. His career best time remains at 1:51.1 taken as a six-year-old.

Trotters were also featured in the $20,000 final of the Frank O’Mara Memorial Saturday. Martini Show and Sam Widger established themselves as the early leaders through fractions of :27.2, :57.0, and 1:26.3. ER Kim and Bradley Ferguson followed cover in third-over fashion and hit another gear in the stretch, trotting home in :27.1 for the mild upset in 1:54.4. Muscle Fashion and Trace Tetrick finished three-quarters of a length back in second over Thunder and Michael Oosting for third.

ER Kim paid $21.60 for the win. The five-year-old Encore Encore mare is owned by Eash Racing Stable and trained by Eash. The homebred mare scored her second win of 2021 and her 10th overall. The mile also marked a new career best for ER Kim, who went over the $100,000 mark in lifetime earnings also in the O’Mara Final.