It was only a matter of time. The ever-tough older trotter Bridge to Jesse’s came into 2020 with $940,000 in earnings. He will exit the year as Indiana’s newest millionaire. The Jailhouse Jesse gelding was a winner in the $15,000 Open 2 at Harrah’s Hoosier Park Saturday, Oct. 24, pushing him over the milestone. 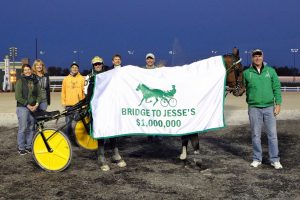 Owned his entire career by William DeLong, W. Patrick DeLong, Ray DeLong, and Roger Welch, Bridge to Jesse’s left the gate for the lead and got it for driver John DeLong, to turn in a gate to wire performance. The seven-year-old set fractions of :27.0, :56.4 and 1:25.1 before trotting home in :27.4 for the win, three-quarters of a length ahead of I Know My Chip and Brandon Bates. Martini Show and Sam Widger finished third. The time of the mile was 1:53.0.

It was the fourth win of the year for Bridge to Jesse’s who has now visited the winner’s circle 46 times in 107 starts. He has turned in five consecutive years with earnings in excess of $100,000 and with the shortened racing season in 2020, he still has more than $61,000 this year for his connections. His career mark stands at 1:51.1 taken last year as a six-year-old at Harrah’s Hoosier Park for Trainer Roger Welch, who has campaigned the four-time Indiana champion his entire career.

Bred by Michael and Randy Wilt of Savannah, Mo., Bridge to Jesse’s was a $28,000 yearling purchase from the Indiana Premier Yearling Sale in 2014. At the time, he was one of 47 by Jailhouse Jesse that sold that year and was the fourth highest price to be knocked down in the sales ring. To date, he is the second biggest money earner for Jailhouse Jesse, only trailing Buck I St Pat, the superstar mare that earned in excess of $2.3 million in her career.

Bridge to Jesse’s is joined by his younger two-year-old brother, Bridge to Success in the Welch barn and the “Bridge Brothers”, as Welch calls them, are side by side in the shedrow. They have a younger half-brother by first crop sire What the Hill, who stands in Ohio, that was just sold for $60,000 to Erv Miller at the Lexington Select Yearling Sale earlier this month.