Harrah’s Hoosier Park pulled off another successful Breeders Crown Championship Friday, Oct. 30 and Saturday, Oct. 31, recording lots of records and firsts during the 37th edition of the event. The 12-race series brought in the first dead heat, the largest $2 payout and Harrah’s Hoosier Park recorded its largest single day handle in the 27-year history of the track with $2,474,344 wagered on the Saturday card. And, that figure may go up as it did not include overseas wagering from Sweden, Finland, Denmark and Australia. 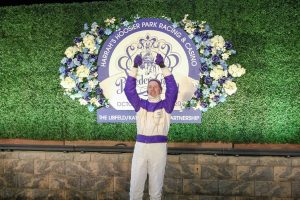 Driver David Miller hoists the Breeders Crown trophy over his head for one of three titles he earned during Breeders Crown weekend, including a win behind Century Farroh in the Open Pace. Photo by Dean Gillette

There were no Indiana sired winners, but 11 horses from the state’s breeding program made the finals and competed. Three of the horses got checks in the championships. The highest finish in any of the races was a fourth-place finish recorded by Ima Diamond Babe (James Yoder) in the two-year-old filly trot and JK Going West (LeWayne Miller), a fourth-place finish in the two-year-old colt and gelding pace. Miller also picked up a fifth-place check with Grand Swan in the Open Mares trot.

Racing fans were treated to a lot of great performances. Tall Dark Stranger was beat in the three-year-old colt and gelding pace by Cattlewash along the inside, only to come back and pass him up, but it was Sandbetweenmytoes on the far outside that nabbed them both in the photo finish for the win, paying a Breeders Crown record $409.80 to win. Sandbetweenmytoes, owned by Jules Siegel’s Fashion Farms and trained by Jim Campbell, has ties to Indiana. His mother, Galleria, also campaigned by Siegel and Campbell, was a track record holder for a long time in the three-year-old pacing filly ranks, a mark set in 1998 before she went on to world champion status, including a Breeders Crown title.

Capacity was held to 597 both nights due to state restrictions associated with COVID-19. However, numerous online options were available. TVG’s Tom Cassidy was on-site with coverage. North American Harness Update was trackside with a live podcast both nights, and Harrah’s Hoosier Park provided live streaming of the signal from their Youtube and Facebook pages. Free programs were also available both nights through the track’s Website.

“This historic, record-setting weekend is a direct testimony of the hard work and effort made by our team at Harrah’s Hoosier Park, the Hambletonian Society, the Indiana Standardbred Association, the Indiana Horse Racing Commission, and our presenting sponsor, The Libfeld-Katz Breeding Partnership,” said Rick Moore, Vice President and General Manager of Racing at Harrah’s Hoosier Park through a track press release. “Once again, Harrah’s Hoosier Park shined on a world-wide stage. We couldn’t be more proud of Indiana’s racing industry, our team, our horsemen and horsewomen, sponsors, and all of the fans watching and wagering from around the world who made this weekend possible.”