Indiana two-year-old trotting colts and geldings were on tap Saturday, July 25 for the first leg of Indiana Sires Stakes action at Harrah’s Hoosier Park. Swingforthefences and Breckenridge both took home impressive wins among the 21 freshman entered for the two divisions. 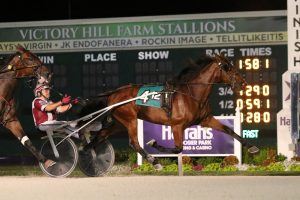 In the first division, favored King Felix and Doug Rideout used an inside post to get good early positioning and lead the way through fractions of :28.2, :59.0 and 1:28.3 before seeing major challenges from the 11-horse field. In the stretch, King Felix held strong as Swingforthefences, who was traveling first over for Michael Oosting, came up for a late challenge. King Felix went off stride and Swingforthefences was clear to trot home for the win by one-half length in 1:57.1, trotting a final panel in :27.4. Brookview Bolt and Sam Widger was placed up to second due to being lapped on to King Felix, who was moved to third.

Owned by David McDuffee and L & L Devisser LLC, Swingforthefences earned his first career win in only his second career start. The Swan for All colt is trained by Melanie Wrenn and was bred by Concord Stud Farm of Cream Ridge, NJ. Swingforthefences was purchased out of the Standardbred Horse Sale at Harrisburg for $100,000.

In the second division, once again, the favorite Gucci Goo driven by Michael Oosting went off stride, this time at the start, leaving the top spot up for grabs. J-S Hopscotch and Alex Udell seized the opportunity to get the lead through the quarter in :28.0.

Once Gucci Goo was settled, he came roaring back to take over at the half in :59.1 to lead the 10-horse field into the second half. Breckenridge came charging around the final turn for Dan Shetler, and the stretch provided a straight shot for him to trot to the wire as the winner in 1:58.1, a final panel in :29.1. Gucci Goo finished second over No Lingering and Ricky Macomber Jr. for third.

Breckenridge, a son of Class Included, earned his first career win in his second start out for Shetler, who also serves as trainer. He was a mild upset winner, paying $16.20 to win. Breckenridge is a recent ownership transfer and is now owned by Shetler and Dojea Stables. Shetler is also the breeder along with Sawgrass Farms LLC.