Breckenridge, the tough two-year-old trotting gelding from the Dan Shetler barn, picked up his second win in Indiana Sires Stakes preliminary action Wednesday, Aug. 26, earning the victory in the first of two divisions on the card at Harrah’s Hoosier Park. Also driven by Shetler, the Class Included son earned a new career best time of 1:57.2 in the effort. 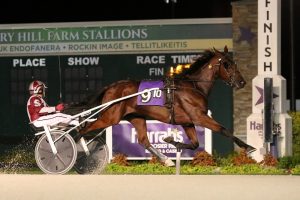 Starting from the outside post eight, Shetler wasted no time getting Breckenridge geared up for a front-end performance. The duo reached the first quarter on the outside of D Swan on Call and Ricky Macomber Jr. in :29 before moving over to the top spot, a position he would hold the remainder of the race.

After the half in :58.4, Breckenridge got a bit of a breather in the third quarter before stepping it up a notch in the stretch, driving off to a four-length advantage at the finish, well in hand for Shetler. ABC Show Time and Don Harmon closed well late to finish second over Mr Sunchip and LeWayne Miller, who also closed well for third.

Breckenridge returned $9.60, $5.60, $3.60 across the board to his backers. The homebred son of Dazzling Miss, who was also campaigned by Shetler, was bred by Shetler and Sawgrass Farms, LLC. He increased his career bankroll to nearly $50,000 in only his fifth career start. Shetler, known for his expertise with young trotters, owns the freshman with Dojea Stables.

In the other division of Indiana Sires Stakes action, Brookview Bolt and Sam Widger surprised the field of freshman trotters with a big surge at the end for the win in 1:57.2. An even longer shot in Flying Swan, trained and driven by Jay Cross, finished second, just a neck ahead of Swingforthefences and Peter Wrenn.

The Swan for All gelding, trained by Ron Burke, was also a winner in the second round of Indiana Sires Stakes action. He returned $31.40, $11.80, $6.00 across the board. Burke Racing Stable, Knox Services Inc., J & T Silva-Purnel & Libby, and Weaver Bruscemi own the gelding bred by Brookview Farms. He was a $52,000 yearling purchase from the Hoosier Classic Yearling Sale.