To say Driver Brandon Bates is on a roll would be an understatement. Bates drove home five winners on the Friday, May 14 card and followed it up with another five wins on Saturday. For the four-day work week at Harrah’s Hoosier Park, he earned 14 wins total. He is now in fourth place on the leading driver standings with 32 wins. 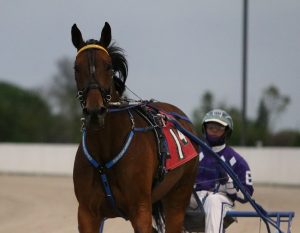 I Know My Chip, a millionaire trotter trained by Walter Haynes Jr., was driver Brandon Bates’ fourth winner in a row at Harrah’s Hoosier Park Sat. May 15. Photo by Dean Gillette

Bates started out his Saturday evening by winning the first four races on the card. After connecting with Keep’s Classy, Alwysasweetvictory, and Snowball’s Romeo, Bates guided I Know My Chip to a gate to wire victory in the $14,000 Open 3 Trot.

Trained by Walter Haynes Jr., I Know My Chip turned in a final panel of :27.4 for the win in 1:54.0, one and one-half lengths ahead of race favorite May Baby and James Yoder. All Wrapped Up and Louis Roy finished third.

I Know My Chip is owned by Brian Carsey, Black and White Stable and Casey Myers. The nine-year-old Indiana sired gelding by Deep Chip now has 47 career wins in 156 starts. The millionaire trotter earned his career best time of 1:52.1 as a five-year-old at Harrah’s Hoosier Park. He is now four for 10 in 2021.

Bates’ final win of the evening was recorded in the 11th race of the night as Latin Lover took advantage of a two-hold trip before advancing in the stretch with a :27.4 final panel for the win in 1:56.4. Blu-Starz and Jordan Ross finished three lengths back in second over Miss Greenbacks and Doug Rideout in third.