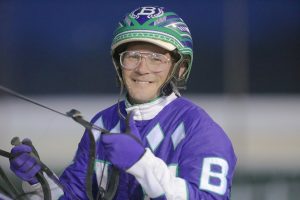 Bates got Fox Valley Extacy out of the gate quickly from the center of the track and was parked on the outside at the first quarter in :29.2 before sliding over for the lead. Lous Abigail and Casey Leonard were right at their backs and drove on by to become the leader at the half in :57.2. From there, the field got a slight breather before Bates was able to get Fox Valley Extacy out in the stretch for the win by three lengths over Lous Abigail. Bee See and Kyle Wilfong finished third.

Trained by Hector Herrera, Fox Valley Extacy earned her second win of the season in the 1:59.0 mile, a new career best. The Pizzazzed filly is owned by Kevin Miller, Ryan Hochsprung, Bert Hochsprung and David Falzone.

Miller and Bert Hochsprung have a special connection to Bates as they are the owners of Priceless, the standout pacing filly from Bates barn. Priceless competed in the Nadia Lobell Stakes at Harrah’s Hoosier Park Friday, July 24, finishing second to Reflect with Me, pacing her mile in 1:48.2. The Indiana sired daughter of Rockin Image now has in excess of $400,000 in career earnings for her connections.

For Bates, he won his 999th career race Saturday, July 25 at Harrah’s Hoosier Park behind Prince McArdle N in the evening’s 13th race to set him up for his 1,000th win Sunday at Hawthorne.

Bates has 58 wins this season in 560 starts. He has scored more than 100 wins the past four seasons and is on track to eclipse 100 wins again in 2020. In all, Bates has driven in more than 9,800 career races and has purse earnings in excess of $8.6 million to go along with his 1,000 wins. Bates is currently ranked seventh on the list of top drivers for 2020 with 25 wins this year at Harrah’s Hoosier Park.