The June issue of “Hoof Beats” had several connections to Indiana, including a profile on driver-trainer Brandon Bates. The profile, prepared by Matt Dorsey, showcased information about Bates off the racetrack. 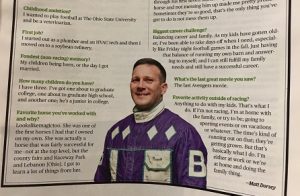 A profile on Brandon Bates was included in the June issue of Hoof Beats.

The profile included a lot of information about Bates’ family. His two sons have been heavily involved in sports during their high school careers and the older son, Hunter, continued his athletic career at Wabash College and is excelling in both school and on the wrestling team. Bates brought up several times in the profile that he enjoys spending time with his family and attending his sons’ sporting events.

Bates conditioned Swandre the Giant to seven straight wins last year before the horse was sold for a reported seven figures. However, Bates referred to Lookslikemagictoo as his favorite horse, noting she was one of the first ones he ever owned.

Bates has dabbled in several careers in his adult life but was always drawn back into racing. He is currently driving at both Harrah’s Hoosier Park and Hawthorne, keeping a busy summer schedule.

In addition to his driving and training responsibilities, Bates is also a board member of the Indiana Standardbred Association.