Sale goers knew Bourbon Courage would garner a lot of attention and a big price through the sale ring. However, the striking dark brown colt surprised everyone by garnering the highest price for a yearling at an Indiana sale in history. The You Know You Do colt brought $255,000 through the ring and was knocked down to Doug Overhiser of Shorewood, Ill. 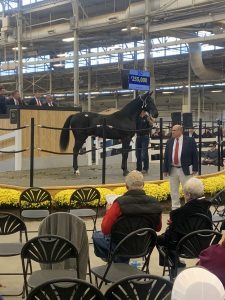 Emily Gaskin-Ratcliff snapped this photo of Bourbon Courage as bidding was winding up Friday, Oct. 22 at the Hoosier Classic Yearling Sale. Photo by Emily Ratcliff

Besides being an outstanding looking individual, the trotting colt is a half brother to Captain Corey, winner of nearly $1 million and the reigning Hambletonian Champion. The dual eligible colt from the first crop of You Know You Do is eligible to both Indiana and Kentucky stakes program next season when he begins his racing career. He was consigned by Peninsula Farm Inc. of Georgetown, Ky.

Bourbon Courage is the second foal from Luv U All, who only made $384 as a racehorse. However, the Angus Hall mare is out of the tough race mare Love You Most, who earned nearly $400,000 during her career. Bourbon Courage shares the name with a standout Thoroughbred that made more than $1 million during his career and is now a successful sire in Maryland.

Overhiser also purchased the half sister to May Baby, who sold earlier in the sale. The Swan for All filly, Swan Kenzie, brought $42,000 for the Oakwood Farms consignment.

One other yearling brought six figures through the sale ring Friday at the Hoosier Classic Sale. Happy Swan, a filly by Swan for All, was knocked down at $120,000. Part of the Wilt Standardbreds consignment, the black filly is the second foal of Happy Place by Muscles Yankee and a full sister to R Desireable Lady, who raced this year and competed in Indiana Sires Stakes action. Happy Swan is from the family of Somebody to Love, who competed at the top level in Canada, including Breeders Crown action and made more than $600,000 during her career. Peter Wrenn, serving as agent, signed the ticket for Happy Swan.

Another yearling of note that sold Friday was the half sister to Little Rocket Man, who was purchased for $80,000 by Tom Pollack. The Tellitlikeitis filly was from the Victory Hill Farm of LaGrange, Ind.

Bridge to Triumph was also a yearling to watch. The half-brother to Bridge to Jesses, multiple Indiana Sires Stakes champion of more than $1 million, was purchased by Bob DeLong and Roger Welch for $95,000. The son of Swan for All was part of the Wilt Standardbred consignment.

The half sister to Shnitzledosomethin and Somethingbeautiful was purchased by Howard Taylor for $40,000. The Luck Be Withyou filly named Seek Peace was from the Luckiana Farm consignment.

Kruise on Dover also just missed the $100,000 sale mark. The Dover Dan colt was purchased for $95,000 by Ryan Miller. The colt is a half brother to Swan in Motion, winner of nearly $500,000. He was part of the Integrity Stables consignment.

The second session of the Hoosier Classic Yearling Sale resumes at 10 a.m. Saturday, Oct. 23 and begins with Hip No. 216.