Bountiful Brittney, the Indiana sired mare bred by David Yoder and Daryl Lehman, was dominant Sunday afternoon at Harrah’s Philadelphia. The trotting mare scored a win in 1:57.0 during the conditioned trot. 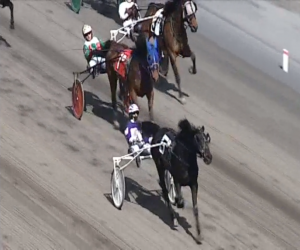 Bountiful Brittney and David Miller trot home for their third win in six starts this year for their new connections at Harrah’s Philadelphia.

Starting from post five, Bountiful Brittney was headed to the lead from the start, obeying the command of driver David Miller and getting to the top before the quarter in :27.2. From there, she continued to hold the field at bay, getting a breather in the second quarter in :30.4 before stepping up the tempo to the three-quarters in 1:26.4.

In the stretch, Bountiful Brittney veered out to the center of the track and held strong all the way to the wire, winning by two and one-half lengths in the mile. Alabama Tender and Barton Dalious finished second over Kinda Like Bud and Anthony Morgan for third.

Bountiful Brittney is owned by Howard Kaufman and Joshua Kaufman of Pennsylvania. John Cabot trains the Swan for All four-year-old, who now has three wins in six starts this season. Her career best time was taken earlier this year in 1:56.0. The Kaufman’s purchased Bountiful Brittney for $11,500 out of the Fall Mixed Sale at the Blooded Horse Sale last fall. She is a sister to JS Peyton and competed at both Harrah’s Hoosier Park and the Indiana Sired Fair Circuit before being sold last fall.