Indiana Sires Stakes champion Born to Thrive scored a win against open company Wednesday, Feb. 20 at Pompano Park. Trained and driven by Rick Plano, the now six-year-old Swan for All gelding picked up his second win in six starts for 2019. 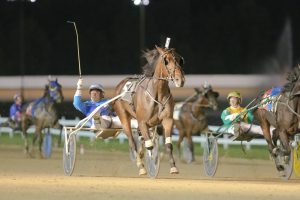 Born to Thrive is shown winning the three-year-old Indiana Sires Stakes championship in 2016 with Rick Plano in the bike. (Photo by Dean Gillette)

Starting from post eight, Born to Thrive came from the back in the outer flow of traffic to get into position late in the race for the drive home. Plano had the gelding in full flight as he neared the finish line, winning by one and one-half lengths in a time of 1:55.3 over Nathaniel and David Ingraham.

Owned by John Campagnuolo, Victor Contento and Maryann Plano, Born to Thrive now has 27 career wins in 97 career starts with earnings in excess of $30,000. He took a new career best time of 1:52.4 last year at Hoosier Park when he won 14 races during the season.

Earlier on the Wednesday card, former Indiana Sired Fair Circuit Champion Vicki All was a winner in the conditioned trotting ranks. The now seven-year-old daughter of Valley Victor, bred by Marlin Fry and Glen Hershberger, wired the field in 1:55.3 with Wally Hennessey in the bike. It was the 29th win for Vicki All, who is now trained by Mickey McNichol.